Reds. Cowboy Killers. Marlboro has been synonymous with smoking for decades.

But did you know Marlboro ranks as a Top 10 Brand in terms of monetary value domestically in 2018?

In fact, its brand value increased 5% from last year, and it has higher value than both Coke and Nike respectively. 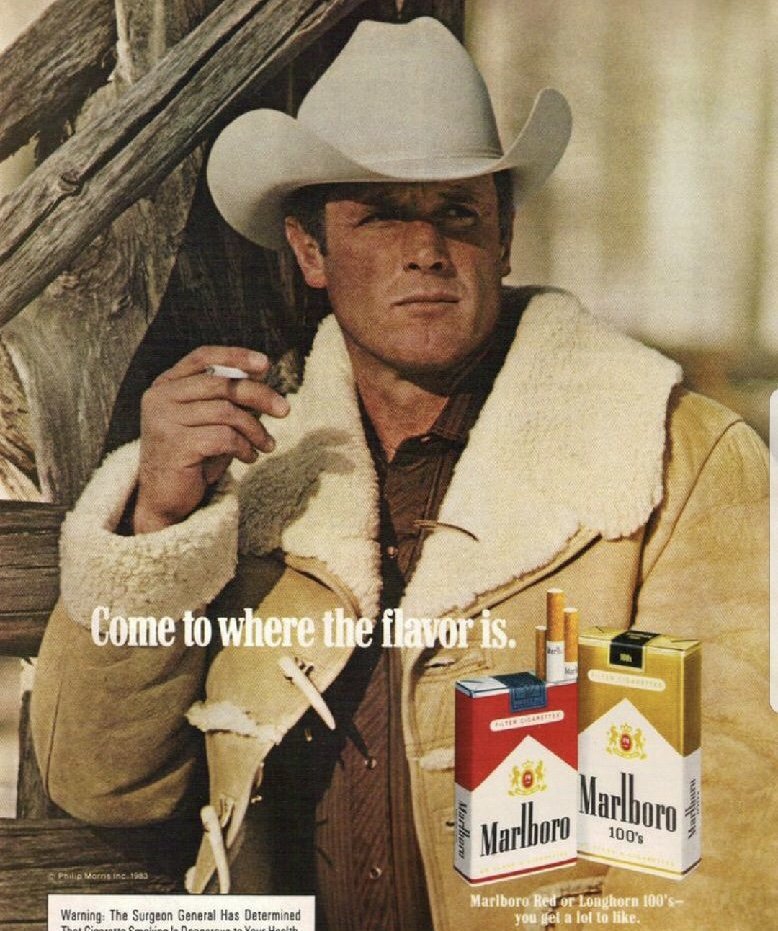 Come to where the flavor is… Brilliant.

There is no place where branding is more relevant than the cigarette industry. Brand loyalty is extremely high as every person who gets another to smoke is essentially an affiliate marketer of that particular brand, so it’s important to a cigarette company that they’re the first ones that get you to smoke. It’s also important to distract the customer from the obvious fact that their product will eventually kill you. Necessity has made these companies masters at marketing. Up until 1970 when forms of cigarette advertisements were beginning to be banned, nobody was better at this advertising than Marlboro. No cigarette or packaging is more recognizable, more American, more smoked than Marlboro. But Marlboro did more than just win an advertising war with their rivals; they changed advertising and branding globally forever.

But how did they do it? Well, when Philip Morris started the company in 1847, their products aimed to target women. Industry leading success wouldn’t occur until the 1950s when new studies came out that stated that smoking caused cancer. As a response to these studies, many tobacco companies started to panic and change tactics, it was at this point that Marlboro made a key move. They pivoted their advertising tactics to primarily focus on men and became the first-ever lifestyle brand in the process.

You’re already super familiar with lifestyle advertising even if you don’t know it. It is when an advertisement tries to tie its product to something else in your life, a feeling, an attribute, etcetera.

• Like when an energy drink ties itself to extreme athleticism

• Or when a camera ties itself to adventure

• A Coke to happiness

• A car to the thrill of the open road

• Or a phone to more than just a phone

When this sort of advertising is effective, you have a lifestyle brand. Lifestyle advertising and branding for that matter as we know, wasn’t always this way.

Let’s go back in time, advertising companies had a much different idea of how to advertise products then they do today. Primarily relying on “facts” and research to validate their marketing claims until Marlboro disrupted things.

The truth is, we don’t really care about research, we care about feeling, and this is where Marlboro’s iconic branding comes into play.

When Marlboro changed its advertising strategy to focus on men rather than women in the 1950s, they also changed their brand strategy by selling their product as a symbol rather than just on the merits of product alone. They did this by creating a smoking cowboy known as the “Marlboro Man”. The Marlboro Man was designed to be the archetype of manliness. He was hard working and living free, literally a portrayal of self-actualization and the American dream. Within one year of this campaign Marlboro went from owning less than 1% of the market to being the fourth largest cigarette company in the world, and within four more years it became the number one selling cigarette in the world and it remains that way to this day.

The Marlboro Man is the GOAT of branding. I think no matter what your stances on cigarettes are, we can all learn from Marlboro’s lesson to help us communicate with others. People don’t want to be sold a product, people want to be sold of feeling, a connection; something that’s worth more than the paper that is printed on.

Got a branding question? Feel free to shoot me a message!